This is the most favorite sentence Tyson has. When he is requesting something to eat, these three little words convey all we need to know. He wants a bowl of cereal with milk. As his words increase, so do his phrases.  Of course his phrases are without prepositions or lengthy requests. Very much to the point. And often times, not totally understood by strangers.

He is a sponge and remembers every place we have ever been and how we got there. If we deviate from the normal route, he becomes increasingly upset that we are going the wrong way. He is also starting to repeat words he hears. We knew this day would come and he keeps us from saying things we shouldn’t. (Similar to putting a quarter or dollar in the jar if you misspeak). We catch ourselves and remember that even saying some thing as simple as sh*t is not something we should be saying and especially not around a mimicking toddler. So now when we are upset and think about even saying that, we say Sheep! It will be laughable at some point when he says that word in disgust and no one knows why.

I am so happy to see how much his language skills have flourished since starting preschool last August. Both speech therapists that work with him, at school and on an outpatient basis are simply amazed at how much he has grasped and continues to learn. Answering the who, what, where and how? are not as easy, but we will continue to work with him on that.

This past week, his sentences have been short and sweet. “Ty sick.”  “Ty not feel good.” “Sit on maw lap.”  “No wipe” (meaning my nose needs wiped). For the past week to the day, my little buddy has been dealing with a viral infection and a respiratory infection. You know he is sick when all he does is lay around and want to be held and sleeps. This is not normal for him. Today was the first day that I have seen a change. He is still very clingy, but has been playing with toys and watching YouTubeKids videos. Baby Tayo the little bus and PJ Mask are some of his favorites or watching dominoes stacked neatly in a row and then falling over in a simple push.  Marbles rolling down a circular toy. Over and over and over again.

He is the only child I know that lights up when the vacuum is brought into the room. He talks to me daily about the “black sweeper” we have. vacuums and ceiling fans can occupy him forever. We have to visit the vacuum cleaner aisle if we are in big stores or steer clear from them. I know this is related to his autism, but I do not have the slightest idea why that is.  He is starting to be brave and not holding his ears the entire time the vacuum is on. It used to terrify him, now it’s a game of wait and see. 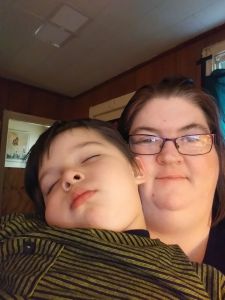 While I have not liked him being sick and having trouble with his respiratory system, I have enjoyed the peace and quiet. There haven’t been days of climbing and jumping, tearing through the house and dumping toys/blocks everywhere to trip over. I know this sounds petty, but when you live with a highly energized child day in and day out, you pray for nap time to come or his energy to fizzle just a little so you can regroup. He can’t be left alone at anytime because he doesn’t see danger at all. In anything. If he feels that the lamp – sitting on top of the desk out of normal reach-is too bright, he will figure a way to scale the desk to turn it off; it doesn’t matter if he could fall or knock other things off and break them, and possibly cut himself or harm others. All he knows is that light needs shut off.

He has managed to get the coffee pot, full, very hot and pour a cup of coffee thinking he is helping. Thank you Lord he is strong and he was not burnt or spilled anything or broke it~it only takes a second of turning your head and he is into something and you certainly don’t want to yell at him while he is holding the aforementioned pot of coffee. Moving it to the back of the counter out of reach, seemed such a simple solution, until we learned that he will find a way to climb on the counter to get to it.

The strength he has reminds me of the strength Samson of the Bible had. I know Tyson is only a few months shy of being four, but his strength is so much more. And I know that many individuals on the autism spectrum have what others might refer to as super human strength, and I have no idea why; just a way they are wired, I suppose. God knows why and he has designed all of us in His image. He gives us all unique designs and gifts to get us through life.

I have hoped and prayed Tyson would be on the mend by now, but we are still battling cough and congestion, runny nose and watery eyes and if that is not enough, he has been kind enough to share and now I am sick as well. I pray mine will not last as long as his.

Thanks for listening to the ramblings of a tired grandma. Tyson is a handful, but oh how very blessed I am to be part of his world.

May you know how much Jesus Loves you~Right in the moment, wherever you are!

I love Jesus. My hope is that I will be able to encourage others and offer hope. I have personal experience with Autism Spectrum Disorder, ADHD, Epilepsy, Sensory processing disorder and multiple developmental language disorders, Fibromyalgia, Sleep Apnea, Post Sepsis Syndrom and Paroxsymal Atrial Fibrillation (Afib). I write about everything and anything, because Jesus is in the midst of it all! View more posts

One thought on “Bowl Cereal Milk”