Earlier tonight, we said our final goodbyes to our beloved family member, Rodney. 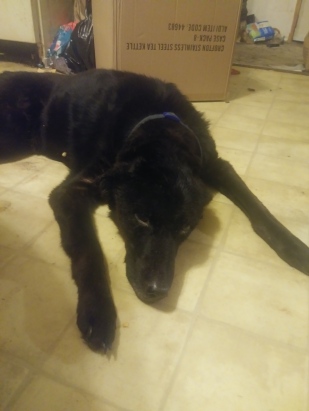 We adopted Rodney when he was 4 years old, maybe even 5-the shelter really couldn’t give us a definitive age. He had been at two previous shelters and if he had not found his forever home with us, his days were numbered.

For the past 7 years, he had met us at the door with a wag of his tail and excitement as he ran circles around us, excited we were back home with him.

He was always underfoot, wanting to be as close to us as possible. The last years of his life, he always had a cone on, because of one “hot spot” that never healed. We attempted many times allowing him to go without the cone, but we never could get his problem fixed. A constant discomfort for him. He adapted. He loved belly rubs and being brushed and then this summer, he started to decline in health. He had multiple tumors, inoperable. Seizures throughout the night and fleas that never left. For the last few days, we wept not knowing how long his suffering would go on. We knew his time here on earth was coming to end. He refused to eat or drink. He stopped wanting to go outside to take care of his business and he no longer had the strength to stand on his own. Lifting his head was almost impossible. Thanks to three of our closest friends, he suffers no more. He is resting at Rainbow Bridge now and some day we will see him again and we look forward to running to greet him. Rubbing his belly and seeing all the pain gone from his body. Until then, he will be waiting with our beloved Sadie who made the journey before him.

We love you Rodney; our hearts and lives will be so different now, but we thank you for allowing us to be part of your life here on earth. Rest well buddy, rest well..

Your sun will never set again, and your moon will wane no more; the Lord will be your everlasting light, and your days of sorrow will end.
Isaiah 60:20 NIV

May you know how much Jesus Loves You~right where you are in this moment.

Jesus can turn any mess into a message.#HopeAlwaysHaveFaith

Recent Posts: Jesus,Love, Mercy and Me

Sharing the love of God through music. My voice, His message. Join the conversation.

The Sacred Journey from Chaos to Calm, with Steve Austin

An autistic speaks about living with autism.

Listen to your inner self..it has all the answers..

Daily Bible Bytes for you

Maritza Molis...Helping Parents to Stress Less when Parenting a child with autism

Experiencing Jesus as Our Hope

Baking, books and everything in between

welcome to my blog

Tales from the mouth of a wolf

Let's work together to overcome PTSD, panic, anxiety, depression in ourselves and others.

Autistic momma to 7 children. We’re proud and we will be heard.